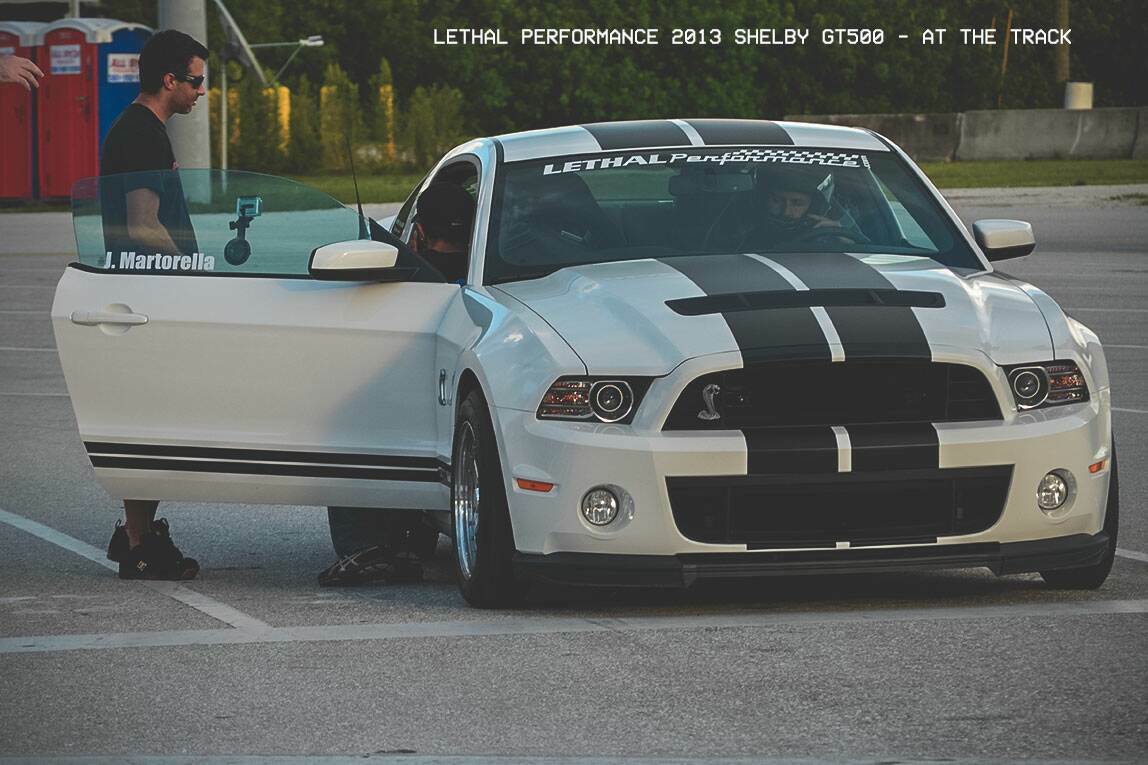 Ahh, the 2013 Shelby GT500. The first year for the Trinity setup. The new 5.8L bottom end topped off with a bigger, better TVS. Of course we had to get one! 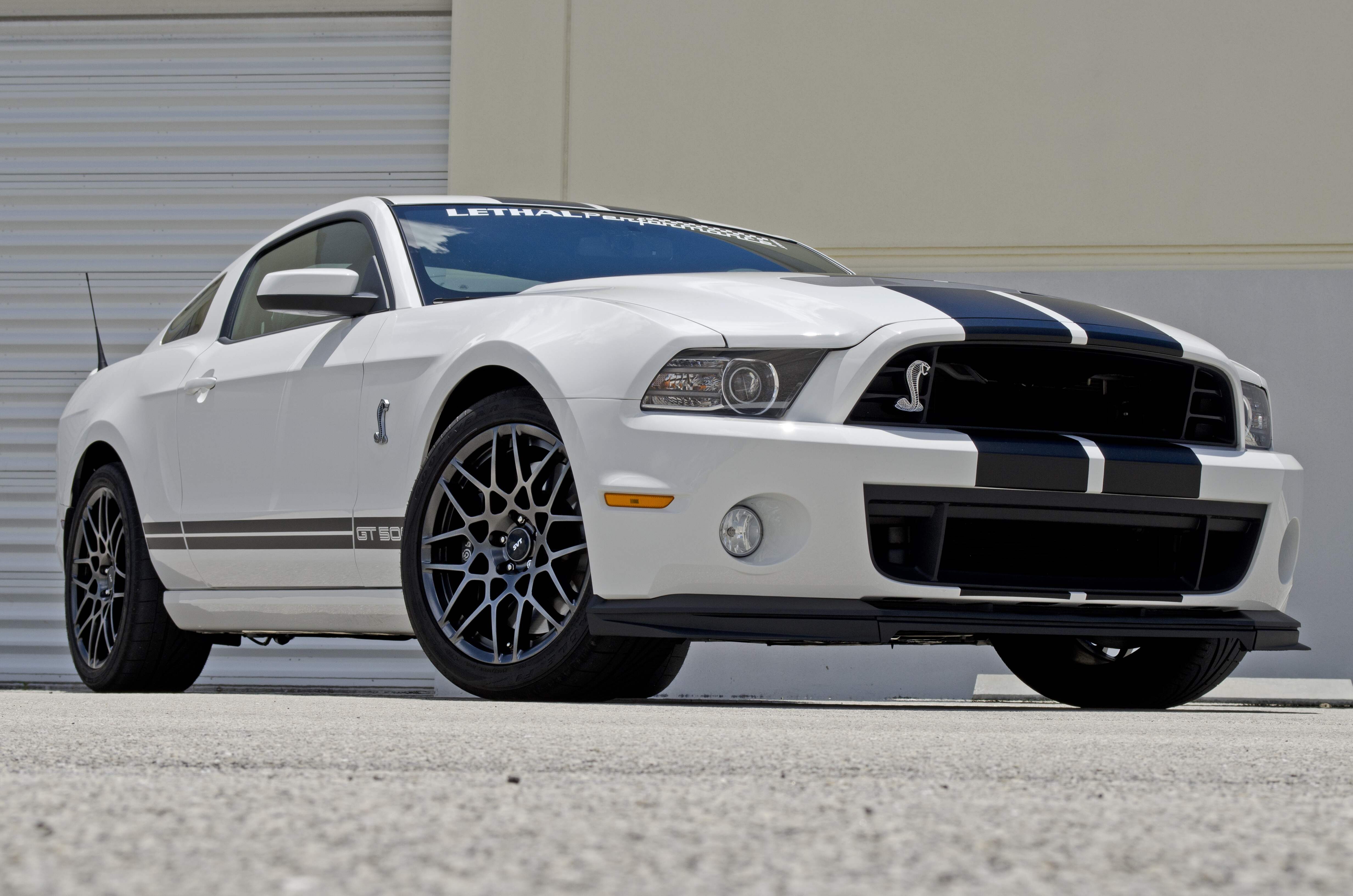 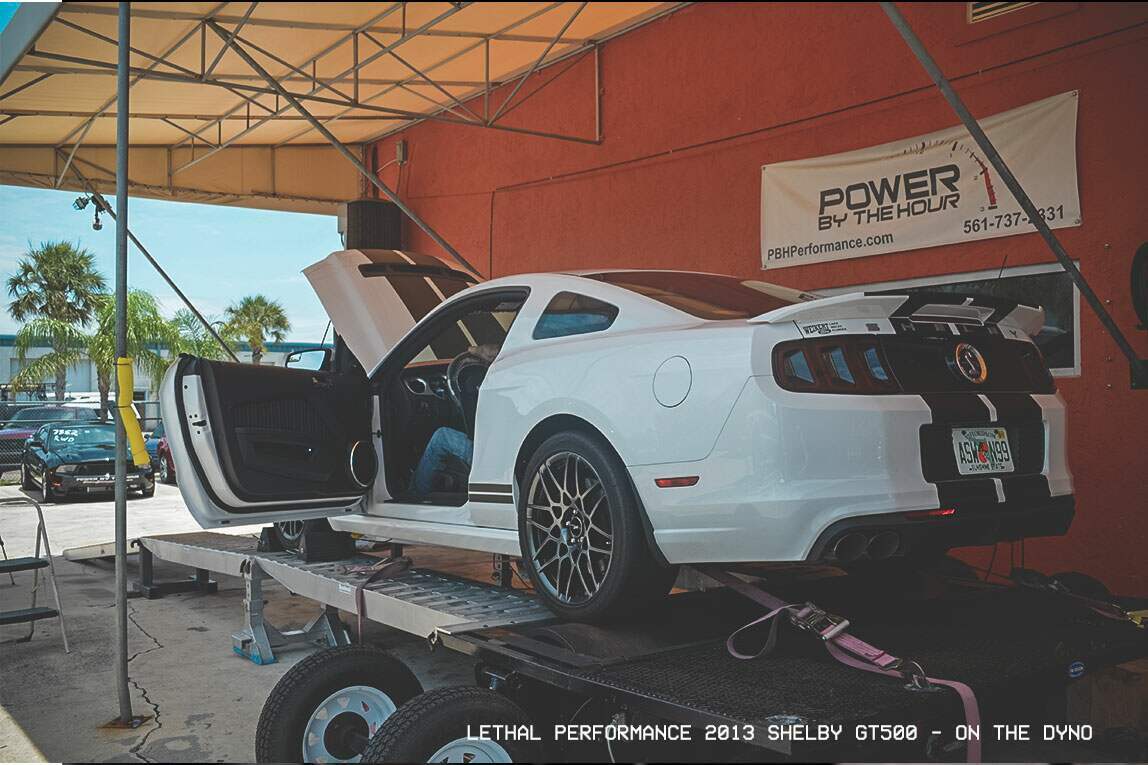 We worked (as we always do) with Lund Racing on the tuning of the car over at Power By The Hour Performance's dyno. First we installed the custom tune by itself, putting down 624hp to the rear wheels. We also threw on our Lethal Performance Offroad X-pipe and bumped that number up to 640rwhp. We wanted to see what these gains would net at the track so we headed up to Palm Beach International Raceway.

We installed a Wilson Manifolds/Nitrous Pro-Flow 150shot onto the car and it jumped from 640rwhp to 763rwhp, a massive 173rwhp increase from stock. WOO.

We also installed a McLeod RXT clutch kit so that Jeremy Martorella could row the gears with a little more piece of mind. 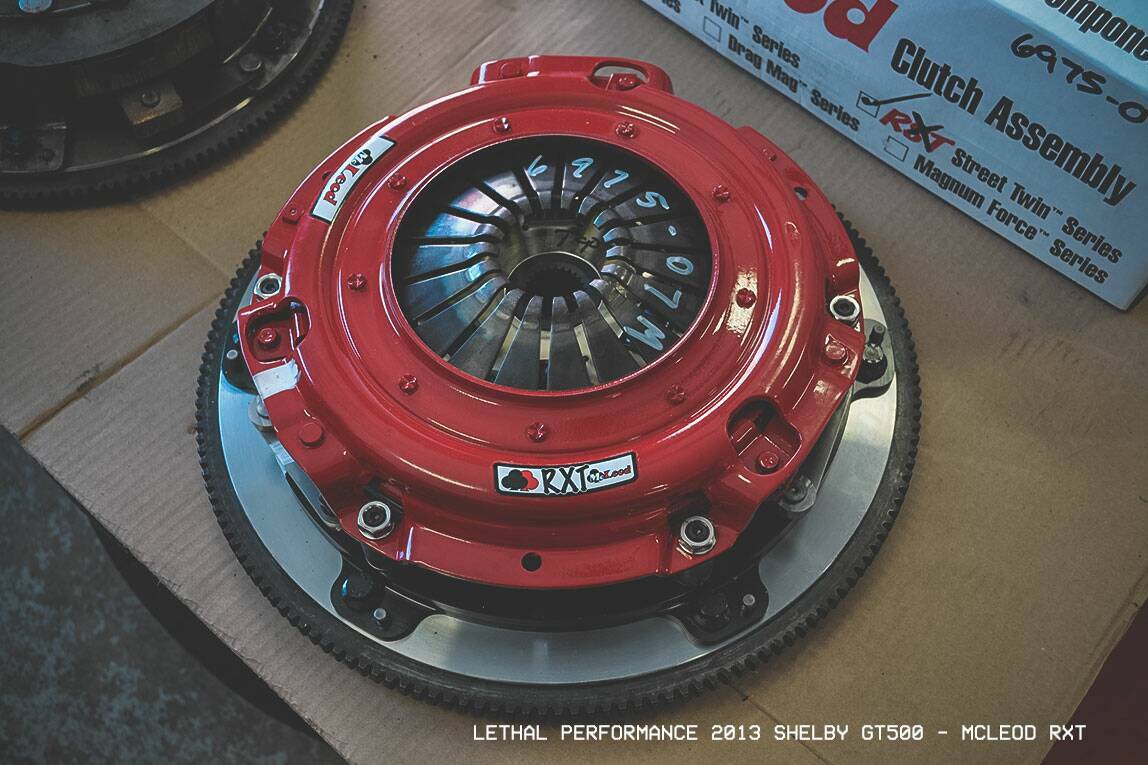 Time to run it!

With the Lund Racing tune, Lethal Performance offroad X-pipe and the Nitrous Pro-Flow 150 shot the car went 9.77 @ 148mph. FLYING. That 150 shot rocketed us down the strip a whole second faster.

But what about the rest of the bolt ons available? Not everyone wants to run nitrous all of the time and we had so many options to choose from for bolt on parts. BACK TO THE DYNO!

We were able to do a dyno run for each part we installed onto the GT500, from just a custom tune to a JLT cold air intake to the American Racing Headers longtubes & X-pipe. Here's the rundown: 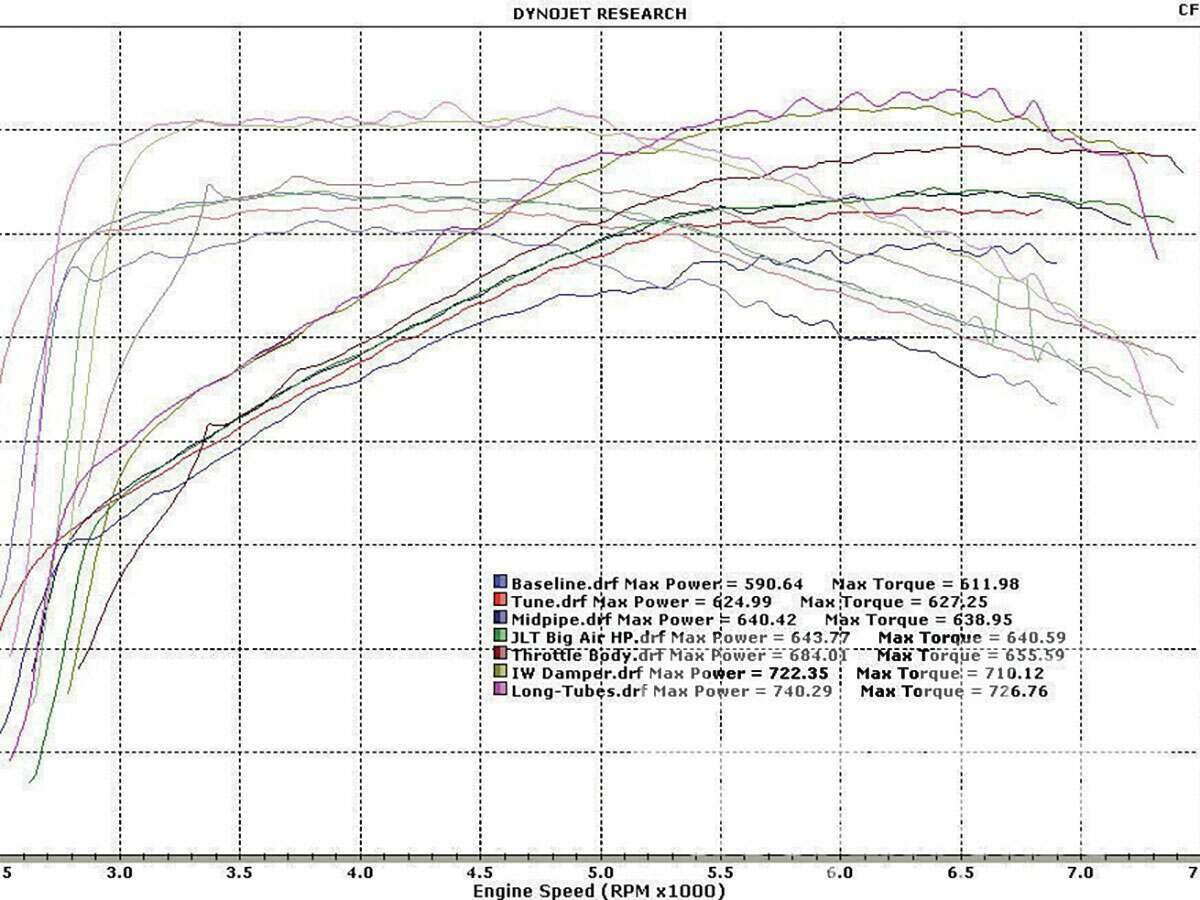 Now that we had the numbers needed for the bolt ons to give our customers the info (as well as to make some awesome power packages), it was time to step up our game with a Whipple Supercharger (I mean, are you surprised at this point?).

We dropped the car back off at Power By The Hour Performance for the supercharger installation. While the 2.9L Whipple Supercharger had become a popular option for the Shelby GT500 guys, we live by the "go big or go home" philosophy here sometimes and we made the leap to Whipple's [massive] 4.0L supercharger. After the blower was on, we tossed the car onto the dyno. We tried to pulley the car down to a 3.50" pulley but Jake and Lund noticed that the car wasn't picking up any power. They chased the issue and found a broken balancer which in turn took out the crankshaft (oof). 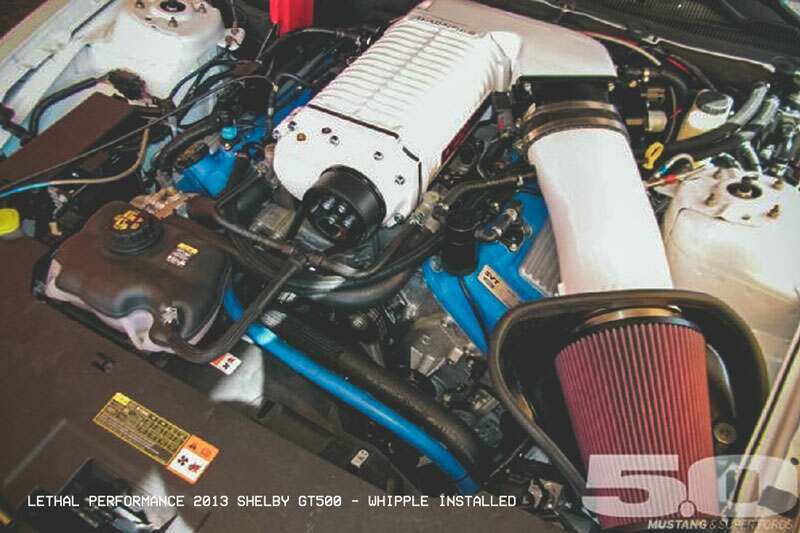 As seen in the video, we also installed a Lethal Performance/DivisionX triple pump return style fuel system so that we knew we would have the fuel to support ALL the horsepower.

We pulleyed the car to roughly 24.8 psi using a 3.50" Whipple supercharger upper pulley and an ATI 15% overdrive balancer. With this setup, the car put down 1106rwhp and 1000rwtq, a HUGE 516rwhp increase from stock. We almost DOUBLED the horsepower! 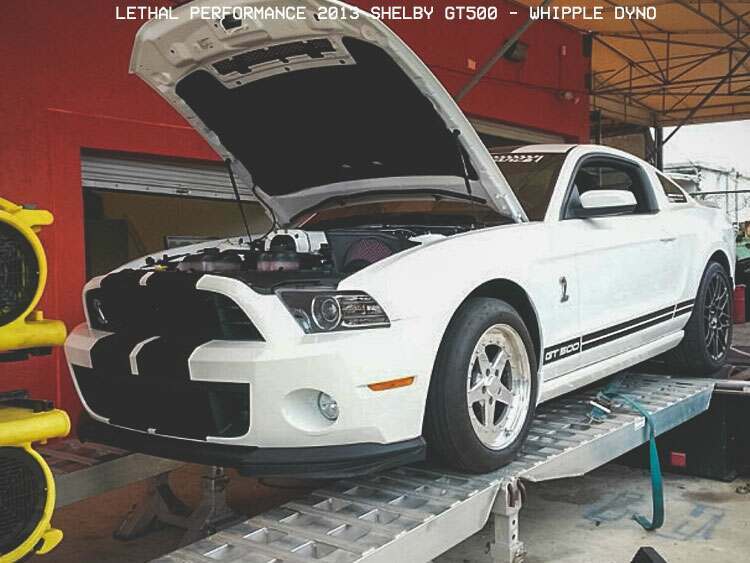 That meant it was time to see what the increase would do at the track. We had already been 9s with the 150 shot of nitrous, but we wanted to be DEEPER into the 9s with the new blower setup. And it was a SUCCESS. 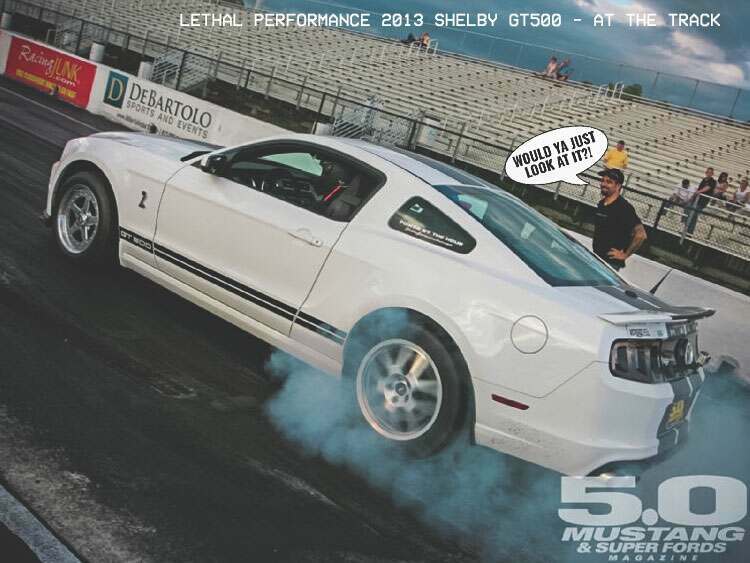 Yep, not too long after our testing with the Whipple 4.0L supercharger, Dustin let us know that he had wrapped up their new 4.5L Whipple Supercharger and we had to have it!

It was back to Power By The Hour Performance to swap out the blowers. 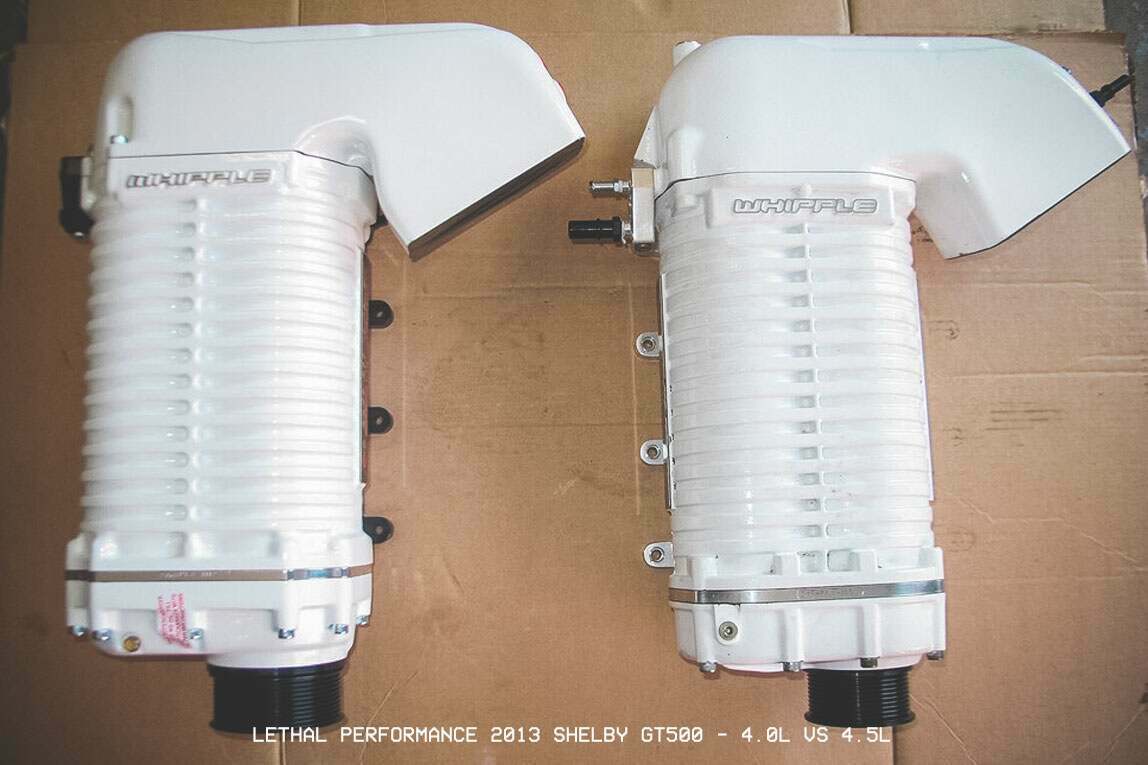 Whipple Superchargers: 4.5L on the left, 4.0L on the right. Crazy what a difference the half liter makes!

With the 4.5L on, we left the same pulley setup. We upped our American Racing Headers to the 2" primaries for a little more exhaust flow.  We added in a Thump Racing tensioner, too, but we still had a tiny bit of belt slip (where was GripTec when you needed them?!). The car still managed to make 1236rwhp / 1102rwtq, a 130rwhp increase over the 4.0L. 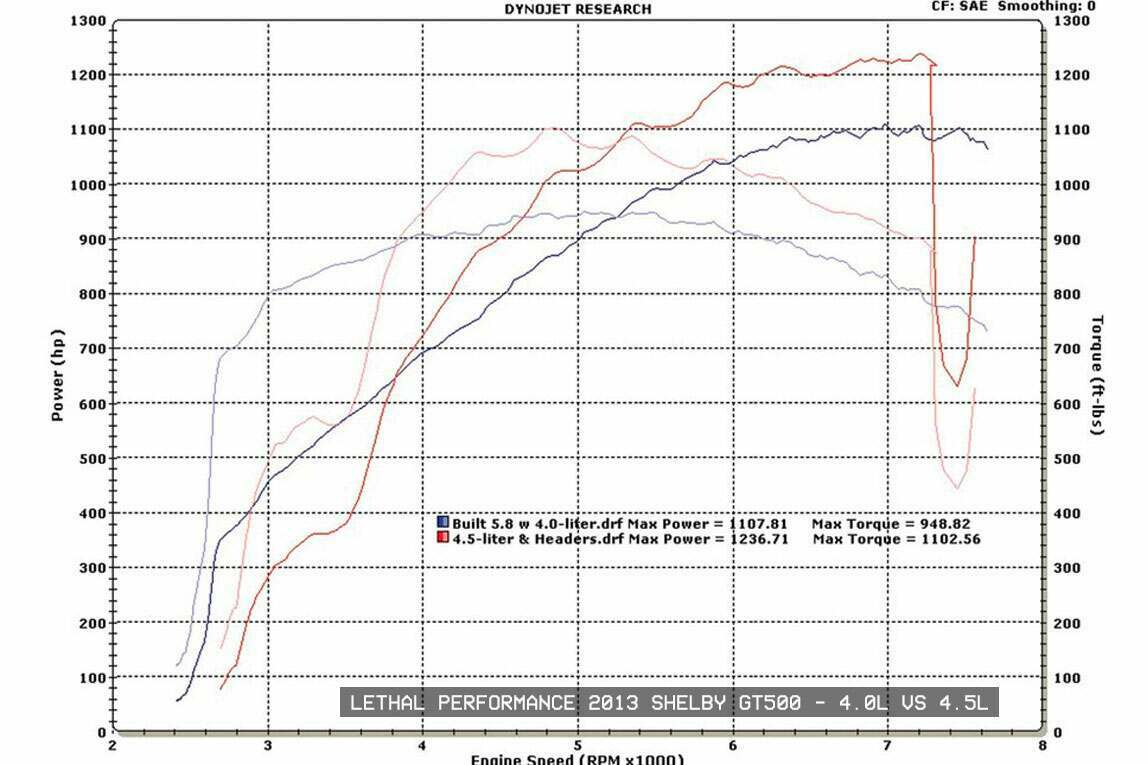 We didn't get a chance to take it back to Palm Beach International Raceway BUT we DID get invited to 5.0 Mustang & Super Fords magazine (RIP) King of the Street shootout! The shootout consisted of street driving, dyno runs and track times to see who came out on top.

And guess what?? WE WON!! It was great to be chosen as the winners among an awesome pack of beastly Mustangs, for sure. 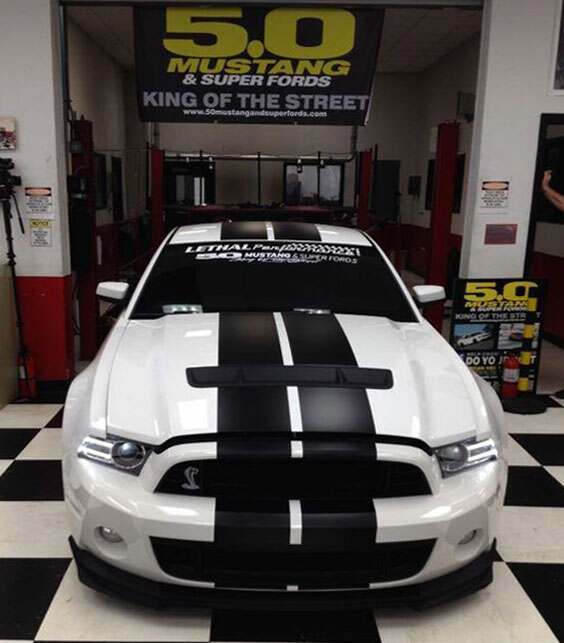 The car was sold shortly after (we miss you, Snow White) to make room for our 2015 models (not just a GT this time, but also the new EcoBoost!).