Home / The Terminator Cobra Engine: Guide To A Killing Machine

The Terminator Cobra Engine: Guide To A Killing Machine

The Terminator Cobra Engine: Guide To A Killing Machine

For the 2002 model year, Ford's SVT division didn't put out a new Mustang Cobra. Why? Well, frankly, because the team couldn't come up with something that kicked enough ass. The lead engineer, John Coletti, wanted them to cook up a vicious monster worthy of being called a "Cobra." And guess what? They did it. SVT's next model would have a fully-loaded arsenal, ready to destroy, courtesy of the Terminator Cobra Engine. Mustang fans have remembered the 2003 Mustang Cobra engine in all its glory, with some still rocking it — or the slightly upgraded 2004 Mustang Cobra engine — today. Why exactly does the Terminator rank as one of the best Mustang engines ever? Let's dig in to find out.

SVT is Ford's "Special Vehicle Team." Founded in the early 1990s and seemingly no longer active, SVT focused on creating high-performance, enthusiast-focused versions of the Ford lineup, most notably the SVT Mustang Cobra. However, the team also developed some original models, like the 2005-2006 Ford GT Supercar. Performance, value and exclusivity were at the core of SVT's output, and the Cobra was the crown jewel of the Mustang lineup for a long time.

What is the Terminator Cobra, and Why is it Called That?

The Terminator Cobra was SVT's Mustang for the 2003 and 2004 model years. The team gave it the nickname "Terminator" because of its incredible power, a huge step up from the previous version. Fans heard of the name, and it stuck. While there were tons of improvements, it's really all about that Terminator Cobra engine! It had a ton of horsepower. We'll get into the exact specs below, but they're sure to knock your socks off.

"Your clothes. Give them to me. Now."

What Makes The Terminator Cobra Engine So Powerful?

There are a lot of factors that go into making this engine powerful — and making it one that Mustang enthusiasts continue to talk about (and, in many cases, use) to this day. Before we get to the raw specs, let's take a look at some of the work SVT did on the 2003 Terminator Cobra engine.

The Next Evolution in Power

Upon its release, the 2003 Mustang Cobra engine was the newest iteration of the Ford 4.6 Modular V8 platform. Additionally, the Terminator Cobra engine is a 4.6L Dual Overhead Cam (DOHC) V8. While the 1996 SVT Cobra was the first to boast a DOHC design, many argue that the Terminator perfected it.

They weren't always, but the 2003 Terminator Cobra engine was the very first factory-supercharged Cobra. Deciding to put a supercharger on this engine right out of the gate was one of SVT's best decisions, by far. It, along with a new iron block, allowed the engine to take full advantage of the DOHC design and immediately made the Terminator Cobra engine a force to be reckoned with.

How Much Horsepower Does a Terminator Cobra Have?

Aided by forced induction, the Terminator Cobra engine hit 390 horsepower, a number that is still good by today's standards. But, when the 2003 Mustang Cobra engine first came out? This type of horsepower was unheard of. Also, the Terminator could reach a top speed of 153 mph — with the electronic governor still on. Take that thing off? You were looking at 180 mph of unrelenting speed from a stock Mustang.

The 2003 Terminator Cobra engine was revolutionary at the time and, as we said, these are still decent numbers.

It wasn't broke, so SVT didn't fix it. The 2004 Terminator Cobra engine has the same specs as the previous model, though the car overall did receive a few minor upgrades, like a better exhaust system. Some claim that it could hit a higher horsepower, but that's not "officially" on the books.

To accommodate all of this power, the Terminator Cobra engine also got some durability upgrades, including:

What Are the Best Terminator Cobra Engine Mods?

As we alluded to, the Terminator Cobra engine is still a pretty popular platform for a lot of reasons. One of the biggest factors is how easily it can be modded. With a few simple bolt-ons, you can have a ride that's competitive on the track. While there are plenty of ways you can power this thing up, we've got a few ideas to get you started.

Below are some of the best ways to push your 2003 or 2004 Mustang Cobra engine to the limits of termination — both for the engine itself and to keep your ride from crumbling under the weight of all that power:

Whoa now, simmer down. We can already see the fumes coming out of some of your ears. This is a very touchy subject for a lot of Mustang fans. But the fact is, it's a pretty common question: Which is better, the Terminator Cobra or the 5.0 Coyote engine? Well, we're gonna get into the fray a bit here...by not really giving you an answer.

It All Comes Down to Preference

We're huge fans of the 5.0 Coyote for sure. But, let's face it — the Coyote is still in production, while the Terminator Cobra engine is not. That said, you still see a lot of Terminators at the track and at Mustang meets, so maybe that's a mark in its favor? A good reason for their longevity is that the Terminator Cobra engines are damn durable, sometimes able to last for hundreds of thousands of miles, even with a ton of abuse. The Coyote, however, is still getting upgraded all the time, so from a technical standpoint, you could say the Coyote is "better." Either way, it's not exactly fair to compare the two (but we absolutely know you will).

The other thing to keep in mind is that a lot of people are still obsessed with the New Edge Mustang era. The Terminator represents the peak of that generation, the absolute best it had to offer. Because of that, there will always be folks who are ride-or-die for the Terminator Cobra engine. As competitive as it still can be, this is a case where those rose-colored glasses might not be such a bad thing. 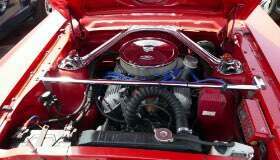 Mustang Engine Guide: A Look At Mustang GT Engines and Beyond Let's get right to the point — there have been a lot of Mustang engines throughout the car's history. And sure, not every single one of them is notable. 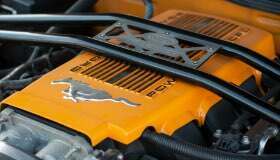 Ford's 5.0 Coyote: A Guide to The Engine That Makes Us Howl

Ford's 5.0 Coyote — A Guide to The Engine That Makes Us Howl Let's paint a picture here. The year was 2010, and Ford was well into the Fifth Generation of the Mustang. People were digging the S197, generally. But… 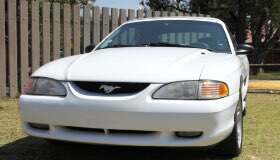 The Ford 4.6 Modular V8: Part of the Family In the late 1980s, Ford was determined to make some line-wide changes, and replacing their old V8 engines was pretty high on the priority list. The Ford Modular V8 was the…