Home / Mustang Engine Guide: A Look At Mustang GT Engines and Beyond

Mustang Engine Guide: A Look At Mustang GT Engines and Beyond

Mustang Engine Guide: A Look At Mustang GT Engines and Beyond

Let's get right to the point — there have been a lot of Mustang engines throughout the car's history. And sure, not every single one of them is notable. But there are A LOT, and many of them are pretty important to our precious pony's development, especially several Mustang GT engines. If you're wondering which ones truly matter, the Lethal Performance Mustang Engine Guide will clue you in. After all, knowledge is power...just not the kind that makes your car fast.

You might not think the early Mustang engines were fast. By today's standards, you might be right. But without them, where the hell would we be? Probably in a damn Chevy — and nobody wants that.

The original Mustang prototype, spearheaded by Lee Iacocca and chief engineer Donald Frey, contained the German Ford Taunus V4 engine, a piece of machinery that was used in a number of Ford cars at that time. It was technically the first Mustang engine, so while it's not all that interesting, it earned a default spot in our guide.

The original GT was simply a performance package on early Mustangs starting in 1964, and many of them came with a 289 Ford Small Block V8, also known as the Windsor V8. So, this is one of the first Mustang GT engines on the market, and it made it clear that Ford was going all-in on performance. This engine was also the basis for the early Shelby GT350 models.

“Every business and every product has risks. You can't get around it.”

While there was no GT model in the second generation, there were still plenty of engine upgrades worth highlighting.

The Windsor engine was still around, though it did take some time off while Ford quit offering a V8 option for their Mustang engines. While we weren't quite at 5.0L levels yet, 1975 Mustangs equipped with this engine could go really damn fast, getting up to 140 hp.

With the 1978 King Cobra, we finally got a true 5.0L Mustang engine. Its V8 power solidified the King Cobra as a real performance car, although it was a fairly limited run.

The Mustang's third generation brought about tons of engine tweaks and upgrades across the 1979 to 1993 model years — along with being the introduction of the classic Fox Body. Plus, we saw the grand return of the Mustang GT! Below are our picks for the most significant engines of this gen.

As the first Mustang GT engine in over a decade, the high-output small block V8 had a lot to live up to — and it delivered, with 157 hp in 1982 and a solid jump 175 hp the following year. While Ford referred to it as a "5.0," it was technically a 4.94L, but we're gonna go ahead and forgive that. Sometimes we just have to let the Blue Oval win. This engine was used in GT models for about a decade, so it had to have done something right.

Even though we're all about that GT action and love our V8s, we have to give credit where it's due. The 1984 Mustang SVO introduced a badass, intercooled 4-cylinder engine that was turbocharged to hit about 175 hp. Hard to argue with those numbers.

Between the SN95 and New Edge body styles, this was a time of great change for the Mustang engine. At this point, we're getting into hardcore horsepower territory.

Developed at Ford's Romeo, MI plant (earning it the nickname the "Romeo Engine"), this was Ford's first Modular engine, replacing the small-block V8s. 1996 was the big year as the 4.6L 2-valve SOHC Modular V8 appeared as a Mustang GT engine, while a 4-valve DOHC version was included in the SN95 SVT Cobra. The SOHC allowed the GT to hit 215 hp, while the DOHC helped the SVT Cobra max out at a whopping 305 hp. Both stayed in their respective models for several years, crossing into the New Edge models with increased horsepower.

The 2003 SVT Mustang Cobra got a major upgrade to the Modular V8: the appropriately named Terminator. This thing was an absolute killer, clocking in at an incredible 390 hp.

Here's where things get REALLY fun. S197 Mustang engines brought a hell of a lot to the table, evolving the Modular engine into what it is today. That includes one particular model that has everyone howling with excitement.

Hell yes. The Coyote. A true beast. Developed as a 2011 Mustang GT engine, the 4-valve DOHC Modular V8 made a massive impact on performance drivers, achieving over 400 hp. Hot damn. That's only gone up in the years since, as the Coyote is still used in current Mustangs. Many Shelby GTs and GT350s have also used the Coyote as their base engine, as well, albeit usually in a supercharged form.

We should also mention this little stepping stone on the way to the Coyote, a Mustang GT engine that appeared in 2005 to 2009 models, as well as some Shelbys.

Sixth-Generation Mustang Engines — And Into the Future

And now, we've reached the present day. The S550 era has given us some nice improvements. The Mustang GT engines have generally stayed in Coyote land, but there have been plenty of new developments along the way. Plus, there's always the future to look forward to.

One 2015 Mustang engine option was the 2.3L EcoBoost, part of Ford's direct-injection engine line that is both turbocharged and environmentally-friendly. Better fuel efficiency and fewer emissions, but still fast? Awesome. It was also the first 4-cylinder Mustang since the 90s. While a lot of fans might have been skeptical of the EcoBoost Mustangs, they've stuck around for a reason, offering horsepower above the 300 mark.

The cross-plane crank "Predator" is yet another model based on the Coyote, this time for the 2020 Shelby GT500. It can hit a balls-to-the-wall 760 hp like it's taking you out to lunch.

The Mustang Mach-E is entirely its own thing — an all-electric crossover SUV. But it's technically a Mustang, and since it's the first electric engine in a Mustang, we feel compelled to include it on the list. Is this where Ford is heading with its Mustang engines? It doesn't really matter. We'll always have our gas guzzlers to keep us warm at night. Hell, maybe the Mach-E will blow us away. We'll give it a chance.

Lethal Performance's Mustang Engine Guide is just the start. If you're ready to start your journey on the road to pony car glory, we want to help. From Mustang GT engines to EcoBoost parts and everything in between, we can get you what you need to forge ahead. If you have any questions or just want to chat about your next Mustang engine upgrade, get in touch with us today! 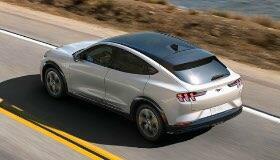 Our reaction upon seeing the all-electric 2021 Ford Mustang Mach-E was probably a lot like yours: "What the hell is this thing and how dare those bastards call it Mustang? Ford is over. The apocalypse is nigh."

The 2020 Ford Shelby GT500 is one of the most anticipated vehicles of the year. The fortunate ones who’ve been able to track test them, drive them or even receive them have sang nothing but high praises...

There’s so much buzz in the community right now about the new 2020 Shelby GT500, which is an awesome, awesome car don’t get us wrong, but let’s not forget it’s predecessors: those Shelbys that came before it...